The Exuberant, the Scandalous & the Repentant

They shouted back, “Crucify Him!”

“Why?” Pilate demanded. “What crime has He committed?”

But the mob roared even louder, “Crucify Him!”

Michael McCann, preaching minister of the First Christian Church of Leesburg, Florida, has become a regular contributor to The Christian newsletter. We are grateful for his thoughtful and challenging insights into the crowds that surrounded our Lord in His final days leading up to His crucifixion and beyond. 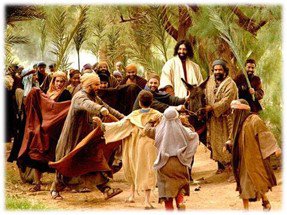 MANY ASSUME THE CROWD THAT PRAISED JESUS on Palm Sunday was the same crowd that called for His execution five days later. I remember hearing sermons from childhood that condemned the fickle crowd that changed their tune from “Hosanna” on Sunday to “Crucify Him” on Friday. But I’m not sure I buy that scenario.

Many visitors from around the Roman world were in Jerusalem at the time, as well as many thousands who resided there. Some estimate that between 200,000 and 500,000 were in Jerusalem and its vicinity on Passover week. There is no reason to think the mob on Friday morning had previously been in the crowd on Palm Sunday, just as a concert crowd in one part of your city would not necessarily be part of a political crowd across town days later.

Further, much of the Friday crowd had been collected by the chief priests and elders and came by stealth early that morning with Judas, the religious leaders, and the soldiers. Clearly this was a hand-picked mob recruited by the leaders. They sought to sneak this arrest through and execute their mock trial in the night while much of the city slept, unaware of the sinister plot.

This was collusion of the deepest sort. A conspiracy from the pit of hell. The contrived crowd was recruited and cued for devious political purposes, and coached on what to say and do. Generally speaking, the city at large would have been in snooze mode during the trials--the perfect time to hustle their diabolical scandal under the radar of the public eye.

And it appeared to work. Everything fell into place. Mission accomplished. Their game plan, successfully executed, was part of the long-term scheme devised by the prince of darkness. Jesus was in custody, so it seemed.

In reality, they were clueless. Their celebrated, successful coup had, in reality, consummated God’s eternal, redemptive purposes, established before the creation of the world. Satan played his cards. His accomplices were ecstatic. By all appearances, his hand was unbeatable. Little did they suspect, however, that Jesus held the trump card in His hand. And Jesus knew the exact time to play it. Sunday morning earthquake. Stone discarded. Empty tomb. Surprise, surprise. Game Over.

This had been a scandal of the most dastardly kind. But this diabolic scheme boomeranged and crushed Satan, sin, and death. In three short days, history’s most stunning reversal clearly demonstrated Jesus’ words: “I lay down my life—only to take it up again. No one takes it from me, but I lay it down of my own accord. I have the authority to lay it down and authority to take it up.”

And, oh yes...many in the crowds on Palm Sunday and the Good Friday crowd were, no doubt, in the crowd on Pentecost six weeks later (Acts 2). They heard Peter proclaim stunning news about the crucified man who was now the resurrected Lord and Messiah. They were cut to the heart, knowing it was their sin that put Him on the cross. And they were relieved and joyous to know that the reigning Lord also offered forgiveness for their sin.

A lot can happen in three days. A lot can happen in six weeks. Who on that dark Friday could have imagined that 3,000 people in the Pentecost crowd would repent of sin and be baptized into the name of this Risen Savior who laid down His life for them that Passover? But they did. And the rest is history. (Read the Acts of the Apostles.)

There were three crowds in Jerusalem that spring: The Palm Sunday crowd who praised Him; the scandalous Good Friday crowd that demanded His crucifixion; and the Pentecost crowd who cried out to Jesus for salvation.

I pray that many, many more will, like the Pentecost crowd, receive the Gospel, repent of sin, be baptized into the name of Jesus, and find forgiveness in Him. And if you are in your sin without Jesus...I urge you to turn to Him today.