No Beauty or Majesty

He (the Messiah) had no beauty or majesty to attract us to Him.

He was despised and rejected by men,

a man of sorrows and acquainted with grief,

and as one from whom men hide their faces

He was despised, and we esteemed Him not.

I SUPPOSE WE’VE ALL BEEN A LITTLE CURIOUS from time to time as to what Jesus looked like. We’ve seen paintings; we’ve seen sculptures, statues and icons. Where do these images and perceptions come from? Is there any truth to them? Does it matter? Does it cause problems?

I wasn’t thinking about any of this until I happened upon a curious article in one of our past newsletters (The Hillsboro Christian, January 26, 1967). It caught my attention primarily because the article began with this note of reliability: “The following is a correct translation of an epistle by Publius Lentulus.”

So I began to do a little research of my own and found that there are a number descriptions of Jesus' physical appearance that can be found on the Internet, all of them claiming some kind of historical authority by virtue of who supposedly penned the description or the archive/library in which it is housed. Of course, they must be true since I found them on the Internet (TIC).

Let me share with you the one printed as “copied” in 1967 in our newsletter. I also found the same on the Internet on the site of The Nazarene Way of Essenic Studies (http://www.thenazareneway.com/likeness_of_our_saviour.htm). 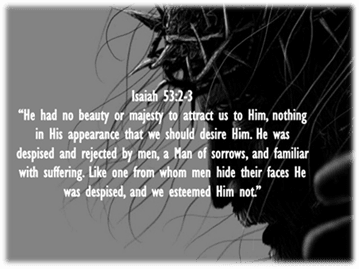 "There appeared in these our days a man, of the Jewish Nation, of great virtue, named Yeshua [Jesus], who is yet living among us, and of the Gentiles is accepted for a Prophet of truth, but His own disciples call Him the Son of God- He raiseth the dead and cureth all manner of diseases. A man of stature somewhat tall, and comely, with very reverent countenance, such as the beholders may both love and fear, his hair of (the colour of) the chestnut, full ripe, plain to His ears, whence downwards it is more orient and curling and wavering about His shoulders. In the midst of His head is a seam or partition in His hair, after the manner of the Nazarenes. His forehead plain and very delicate; His face without spot or wrinkle, beautified with a lovely red; His nose and mouth so formed as nothing can be reprehended; His beard thickish, in colour like His hair, not very long, but forked; His look innocent and mature; His eyes grey, clear, and quick- In reproving hypocrisy He is terrible; in admonishing, courteous and fair spoken; pleasant in conversation, mixed with gravity. It cannot be remembered that any have seen Him Laugh, but many have seen Him Weep. In proportion of body, most excellent; His hands and arms delicate to behold. In speaking, very temperate, modest, and wise. A man, for His singular beauty, surpassing the children of men"

This description states Jesus had “deep chestnut colored hair.” Another “written artifact” claims His hair was golden. Hmm . . . I wonder which it really was? Most of the sources I read, which I consider spurious or apocryphal, describe His appearance in glowing terms, such as “excellent”, “without spot or wrinkle”, “celestial”, “nothing repelling”. These alone raise red flags for me.

To be sure, Jesus did come in the flesh. Jesus’ hair was a particular color. Jesus may have been short, or He may have been tall.  Jesus’ smile may have been straight or crooked. Jesus may have squinted when He smiled, but these things are of no importance at all. In fact, the fixation on Jesus’ physical features may be more an indictment on our morbid carnality and our tendency to major on the superficial than anything else, obsessing over things of which Scripture is utterly silent. To the contrary, Scripture tells us that, “Man looks at the outward appearance, but the LORD looks at the heart” (1 Sam. 16:7). Jesus Himself said that “the flesh counts for nothing” (Jn. 6:63).

There is, however, one passage of Scripture that does address the physical countenance of Christ. It is on this prophetic word from the inspired pen of the prophet Isaiah I will rely.

He [the Messiah] had no beauty or majesty to attract us to Him,

nothing in His appearance that we should desire Him.

He was despised and rejected by men,

a man of sorrows and familiar with suffering.

He was despised and we esteemed Him not.

This is the Jesus that amazed the masses, bewildered the Romans and infuriated the establishment. This is the Jesus to whom “every knee will bow, in heaven and on earth and under the earth, and every tongue confess that Jesus Christ is Lord to the glory of God the Father” (Philip. 2:9-11).